If you like mussels, then you’ll probably love the commonly underrated cockles. They’re less briny, full of flavour and a little cheaper than clams.

Just like mussels, they’re a nice dish to eat on a rainy day served alongside some toasted buttered bread to dip in the flavourful broth. You can eat these as a side dish served along with some fish or on their own.

These little clams are braised in beer, tomato, garlic, and finished with a little butter and fresh basil. It’s an easy, no-frills recipe that can be prepared in under 10 minutes once the clams have been soaked.

Are Cockles the Same as Vongole (Clams)?

But cockles are still worth eating!

They’re cheaper for one, and because their flavour is less strong, some seafood-haters may actually appreciate the less briny flavour.

You can easily spot the difference between clams and cockles by the shape of their shells. Clams have smooth shells and cockles have ridged shells.

How to Buy Cockles

Like most mollusks, cockles must be bought alive. Dead cockles begin to release a dangerous toxin that will not disappear with any amount of cooking.

Only buy fresh clams from a fishmonger you trust as quality is important for safety. They should smell fresh like the sea. Avoid and discard any clams that smell bad.

It’s normal to find a few dead cockles in the batch but if they’re mostly dead I would return them for a refund.

Lastly, ask the fishmonger if they’ve been purged or pre-soaked. This may save you some time and I’ll explain in the next section.

How Do You Clean Cockles Before Cooking

Just like clams, they’ll need to be purged first before eating to remove the sand trapped inside the shells.

To purge the clams, you’ll want to soak them in sea saltwater in the fridge for one hour up to overnight. This way the clams will release the sand inside their shells into the freshwater.

Don’t use iodized salt (table salt) in the water as the clams don’t like this. Simply add a little sea salt to some fresh water and stir until it tastes like the sea. If you don’t have sea salt, regular freshwater will also work.

After purging, lift the clams out of the water into a new bowl of freshwater to remove the sand at the bottom of the bowl. Rinse thoroughly with cold water to remove any sand on the outside of their shells.

How to Cook Cockles

After the clams have been soaked, it’s time to cook em’!

Beer: Beer adds a little bitterness to the clams which I absolutely love. I’m using a light-to-medium Dutch beer, Hertog Jan, but feel free to use your favourite light beer. IPA’s will also work nicely with this recipe but avoid strong beers which may take away from the delicate flavour of the shellfish.

Tomato: The base of the sauce that provides a little acidity to the dish. You can use fresh tomatoes, canned or jarred tomatoes in this recipe.

Garlic: This adds a ton of flavour to the dish. You could also add some finely diced red onion if you like.

Basil: Basil adds freshness and colour to the dish. Other soft herbs like chives, parsley and chervil would also work well if you can’t find basil.

Some vegans consider cockles, oysters, mussels and clams to be vegan-friendly.

The idea is that because cockles don’t have a central nervous system they’re unlikely to feel any pain and similar to plants.

How Long Do Cockles Last?

Ideally, cockles should be cooked right away or the following day after purging.

Once they’re cooked, cockles will last in the fridge for up to 3 days.

They freeze well if stored in the broth in a sealed container. A good tip for freezing cooked cockles is to remove them from their shells and store them in their broth. You can use defrosted cockles for a delicious pasta sauce.

When is the Season For Cockles?

The season for most shellfish runs from September to February but depends on where you live.

There’s an old saying that says don’t eat shellfish in the months that don’t end in the letter “r”. This is because an ugly toxin from Red Tide Algae is more common during the warmer summer months and increases the chance of getting sick from contaminated shellfish.

Still, that doesn’t stop most people from ordering the spaghetti alle vongole at my work during the summer months. This is because Red Tide levels are monitored more frequently and harvesting is banned during these times. Also because most shellfish are farmed, this further reduces the chances and it’s not very likely. 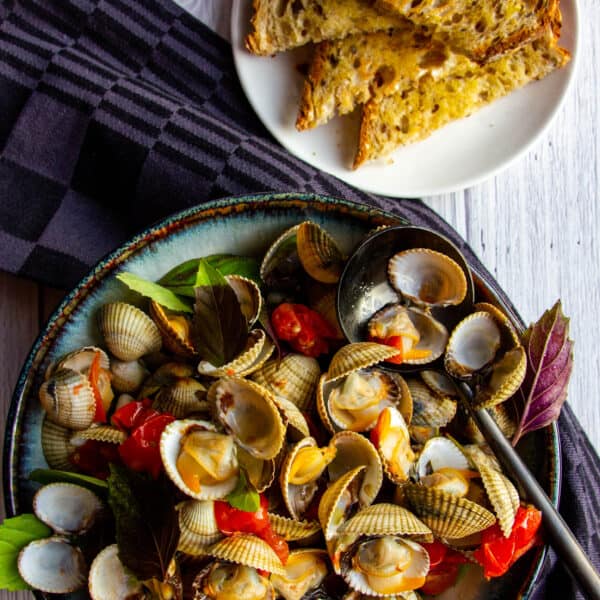 Beer-Braised Cockles with Tomato and Basil

One of my favourite ways to enjoy cockles is braised in beer, tomato, butter and garnished with fresh basil. Enjoy these as a side dish or as a main course with lots of buttered bread.
Print Recipe Pin Recipe Rate Recipe
Prep Time: 10 minutes
Cook Time: 8 minutes
Purging Time: 1 hour
Total Time: 1 hour 18 minutes
Calories: 448kcal
Cost: $20/14€
Prevent your screen from going dark

If you don’t have sea salt, you can use plain water to soak the cockles.

“5 Alive” Salmon Ceviche
This salmon ceviche has lemon, lime, grapefruit and orange for a blast of fresh citrus flavour. Ideal for hot summer weather and to be consumed the same day.
Check out this recipe