*THIS* garlic butter shrimp pasta is just SO GOOD!

Heads up though, if you’re not a real garlic lover, then don’t even bother scrolling down because this pasta is GARLICKY!

And this is no ordinary shrimp pasta either…

Because I’ve got a little secret technique that’s an absolute game-changer for a simple dish like this.

The secret is in my patent-pending (not really) Flavour Bomb which is added to the shrimp at just the right moment for a punch of chilli-lemony-garlicky goodness!

And coming in at under 20 minutes total, that makes this pasta a surefire weeknight warrior!

This Garlic Butter Shrimp Pasta is So Easy

As I’ve probably made a million pasta dishes in my cooking career, you could say that I know a thing or two about pasta.

If you’ve always wondered how they make pasta so good in restaurants, then today is your lucky day, because I’m giving away all my tips in this recipe.

This pasta is incredibly simple and that means that just a few simple techniques will make a HUGE difference.

The flavour bomb makes life much easier because you can quickly add a punch of flavour to the dish. Plus, you don’t have to chop garlic! Win!

Let’s talk ingredients before we continue. I mean, do you even have the right ingredients? Better to check now…

Pasta: For me, linguine is my top choice for seafood pasta but there are other options. Fettuccine, tagliatelle and spaghetti are all great options.

Shrimp: Look for large shrimp with the peel still on. Yes, I know what you’re thinking…” Awww but I HATE peeling shrimp”. Shrimp peels have a ton of flavour and it doesn’t really make sense to throw them away. Plus how long does it really take to peel 10 or so shrimp? You can also buy easy-peel shrimp which have already been butterflied, making them much easier to peel.

Also, I’m using frozen shrimp. It’s not the best but it’s also not the worst. Just whatever you do, don’t buy pre-cooked shrimp. Raw shrimp will release much more flavour into the sauce than the pre-cooked and is usually has a better taste.

Garlic: I mean do you even have to ask? Don’t even make this pasta if you don’t have garlic! Are you crazy?!

Butter: I use unsalted because it’s easier to control the amount of salt in the dish. Cutting the butter into cubes and keeping it cold will make an extra special, velvety smooth sauce for this pasta.

Lemon: Lemon is a star player in the dish and must not be forgotten. I’m using fresh lemon zest and juice which adds brightness and freshness to the dish. If you don’t have lemon use lime or a splash of white wine may be used to deglaze the pasta instead.

Aleppo Chili: I’m so in love with this Turkish spice that I’m guilty of using it in almost all of my recipes. It’s mild but carries big flavour. It also adds a gorgeously appetizing red hue to sauces which you won’t get with regular chili flakes. If you can’t find this one then use half as much red chili flakes or half as much paprika for a similar effect.

Herbs: There are a lot of herbs that will work with this dish. Just please, whatever you do, don’t use dried herbs here! Fresh herbs are a must because they have a much better flavour. I’m using chives and parsley but you could also use tarragon, chervil or even basil in this dish.

Asparagus: This is totally optional, but I think it’s nice to add a few veggies to this. If you don’t have/like asparagus, you also try this pasta with small diced zucchini, red peppers, or peas.

Here are a few tips for cooking shrimp:

How to De-Vein Shrimp

Sometimes shrimp comes de-veined but usually not. The “vein” of shrimp a.k.a the “poop tube” should be, for obvious reasons, discarded.

After peeling the shells, check the back side of the shrimp along the spine. Here you’ll find a dark vein that should come off easily with the help of a pairing knife or a toothpick.

If no dark tube is found it’s likely already de-veined and it’s ready to cook.

What’s this “Flavour Bomb” You Speak of?

It’s the not-so-secret ingredient that saves a bit of time and adds a burst of flavour.

All you need to do is rasp 1 lemon and 2 cloves of garlic into a small bowl. Mix it with some olive oil and some Aleppo chili flakes and that’s it, you now have the power of a flavour bomb.

You can use all of the flavour bomb for this recipe or save some for later. Because it contains oil, it will last for up to a week, covered in the fridge.

I’m giving away all the secrets…

Try My Other Pasta Recipes

How to Make this Garlic Butter Shrimp Pasta

Here is the quick recipe summary on how to make this pasta:

What sauce goes good with shrimp?

Do you cook shrimp with butter or oil?

Both can work. Butter always works but because butter has a lower smoke point, it will burn faster than oil. In my recipe, I use a mixture of butter and olive oil which I think gives the best flavour.

What goes well with garlic shrimp?

Garlic bread, ceasar salad, buttery dinner rolls or biscuits are all good choices. Most green vegetables will also work like such as sauteed asparagus, baby broccoli, or a light cherry tomato salad.

Can you use cooked shrimp in pasta?

I wouldn’t. Pre-cooked shrimp is better for cold appetizers or sides rather than pasta. When you use pre-cooked shrimp, a lot of the flavour has already been cooked out and you’ll end up with a very bland pasta sauce. 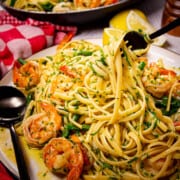 For the Flavour Bomb

A ½ lb of pasta makes two big portions plus a little extra for later.

Easy Pull Apart Milk Buns
Super soft and fluffy milk buns that can be made in one day. These buns are amazing hot out of the oven with a little butter and crunchy sea salt.
Check out this recipe

Sauteed Asparagus WIth Citrus Mayonnaise
This tasty sauteed green asparagus with citrus mayonnaise is ready in less than 20 minutes. Gluten free and vegetarian.
Check out this recipe

Sautéed Broccolette with Garlic, Lemon and Aleppo Chili
A quick and tasty method for broccolette, broccolini or baby broccoli. Quickly blanched and sautéed with garlic, lemon and an Aleppo chili infused oil. Vegan, keto, and gluten-free.
Check out this recipe