This Instant Pot navy bean soup is prime example of the magic of pressure cooking.

Not only do you end up with that beautiful, creamy texture of the navy beans, you’re also getting a much more flavourful broth in half the amount of time.

And don’t worry if you forgot to soak the beans, because I’ve included a way around that in the headings below!

I love this soup during the early days of spring when days begin to get sunnier but it’s still cold enough for a hot soup.

The secret to my Instant Pot navy bean soup is a little curry powder.

I promise the soup will not taste like a curried soup either. Just a 1/4 tsp is barely enough for anyone to notice it’s there, but just enough to add a nice little bump of flavour.

I’m also using a little Aleppo chili which is quite mild but adds a nice flavour. This is one of my favourite Turkish spices and I use it all the time.

Although it can be a little hard to find. You can normally find this in Middle Eastern grocery stores that sell Turkish or Syrian ingredients and it will most likely be called Pul Bieber (the sweet one).

If you can’t find that spice just substitute for some red chili flakes instead.

The perfect ham for a navy bean soup is in my opinion is a smoked ham hock.

The smokey, pulled-pork-like meaty flavour of the ham hock is a perfect match with creamy navy beans.

The problem with smoked ham hocks is they can be hard to find and that’s why I’ve used thick, smokey bacon for this recipe instead.

Ham shank is another great option as it will be a bit meatier and less fatty than smoked bacon. But ham shanks aren’t usually smoked so you won’t get that awesome smokey flavour.

If you’ve got a special occasion coming up, then go for the ham hocks if you can, as they’re much more impressive.

Should I Soak My Beans?

This is still a big debate in the culinary world, but only when it comes to pressure-cooked beans.

Pre-soaking your beans is always better but it’s easy to forget. If you do forget, it’s not the end of the world in terms of bean cookery and your beans will still be edible but don’t expect perfect beans.

Instead of going into a lengthy debate on whether or not you should soak your beans, I’m just going to list a few benefits of each method below:

Reasons to Soak Your Beans

Reasons to Not Soak Your Beans

When in doubt, it’s better to overcook the beans for this soup for a creamier soup consistency.

Even the same type of beans may cook differently depending on how old they are, so it’s better to play it safe and add more pressure-cooking time than less.

Keep in mind the recipe will be slightly different and will be as follows:

Follow the same instructions as the ham hock recipe above but cook on High Pressure for 60 minutes.

Follow the original recipe below exactly but change the cooking time to 60 minutes on high pressure instead of 30 minutes. Natural release for 15 minutes.

How to Make Navy Bean Soup Without an Instant Pot

You’ll definitely want to pre-soak your beans because un-soaked beans don’t cook very evenly over the stovetop. You can however do the emergency pre-cook if you forget to soak the beans. It won’t be as good as pre-soaked beans, but it will still be edible.

How to Do the 911 Emergency Bean Pre-Soak:

How to Make this Over the Stove:

This soup freezes wonderfully and you’ll thank yourself later if you have leftovers.

How to Reheat this Soup

The best way to reheat this soup is to put it back in the instant pot with the lid on and set the saute function to 15 minutes. Once it boils, it’s ready to eat.

You could also heat it up on the stove in a pot until it comes to a boil.

How do you fix bland navy bean soup?

A bland soup means you didn’t add enough salt, lemon or herbs and spices. Adding a squeeze of fresh lemon juice is a great way to bring a little brightness to a dull soup.

Are small white beans the same as navy beans?

Yes. Navy beans are a variety of small white beans and the cooking time will be the same as navy beans.

How do you cook pre-soaked beans in the Instant Pot?

Can I cook navy beans without soaking?

Yes, you can but you’ll need to increase the cooking time. I would try 50 minutes of high pressure with 15 minutes of natural release. If the beans are still hard after that, put the lid back on and try another 5 minutes of pressure cooking until they’re fully cooked.

Why are they called navy beans?

They’re called navy beans because these beans were served to the American Navy sailors during the 1800s. [1]

For some people it does but for some people, it doesn’t. Personally, I notice a big difference and feel much less bloated after eating beans that have been soaked and skimmed compared to raw cooked beans.

My Beans are Still Hard, What Should I Do?

Depending on how old the beans are, they can take longer to cook or cook unevenly. If you still have undercooked beans after the recommended cooking time, simply put the lid back on and pressure cook for another 5 minutes (with 10 minutes natural release) until they’re fully cooked. 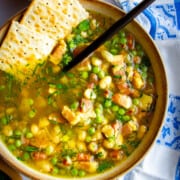 Avoid seasoning the soup until after cooking. Ham hocks, ham shank and bacon usually have enough salt to flavour the soup.  Skimming the scum from the soup before pressure-cooking will make a cleaner tasting soup and also make it easier to digest. It also helps to remove some excess fat from the bacon.

Try These Other Instant Pot Recipes

Easy, No-Fail Instant Pot Basmati Rice
A guide for how to cook instant pot basmati rice with tips to make sure your rice is perfect every time.
Check out this recipe

Short Rib Chili – The Ultimate Pressure Cooked Super Bowl Chili
This recipe uses a delicious pressure cooked short rib stock and a secret weapon umami butter to make one hell of a super bowl chili. Plan it out, grab a beer and let's get cooking.
Check out this recipe

How to Make Chicken Stock
How to make chicken stock with an Instant Pot. Healthy, comforting and the base of all good sauces.
Check out this recipe