*THESE* roasted pepitas with chicken fat, cinnamon and cayenne are salty, crunchy, slightly hot, and so good they’re almost addictive.

The chicken fat combined with the warm spices adds some nice wintery-autumn flavours that we just can’t get enough of.

Plus, if you’ve got leftover chicken fat from roasting chicken bones for chicken stock, then these roasted pepitas are a great way to make use of that.

These roasted pumpkin seeds are dairy-free, gluten-free, keto and an awesome healthy snack to add to your snack drawer.

What are Roasted Pepitas?

Pepitas are essentially pumpkin seeds except they don’t have a husk.

You’ve probably seen the cream-coloured pumpkin seeds which are common in pumpkins for carving. Although similar, pepitas are from a different variety of pumpkin that doesn’t contain husks.

When you roast pepitas they become crispier with a stronger and more delicious roasted flavour.

What Can I Use Roasted Pepitas For?

They’re great as a quick healthy snack on their own but here are a few other ideas:

Chicken fat: I like to use rendered chicken fat for these because it adds a lot of flavour and is a good way to use up something I might normally throw away. You can also use butter or a high-smoke point vegetable oil for a vegan option.

Cayenne: A small amount of cayenne gives these roasted pepitas a little kick without knocking your socks off. Originally I wanted to use Aleppo chilli flakes in this recipe but they can be difficult to find so cayenne is the next best thing. Also, if you like it hotter, add more spice!

Cinnamon: A little cinnamon brings on the wintery-fall vibes and tricks your mind into thinking it’s sweet.

Salt: When you add salt to these, this is when they become addictive!

How to Make Rendered Chicken Fat

I’m using the rendered chicken fat that I get after roasting chicken bones for chicken stock.

To make your own rendered chicken fat:

How to Roast Pepitas Effectively 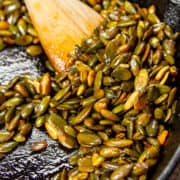 Let the pepitas cool completely before storing a sealed container at room temperature.

How to Toast Pecans
How to toast pecans with a simple, no-fail method plus a few delicious flavour ideas and a recipe for cinnamon + chili toasted pecans.
Check out this recipe

How to Roast Hazelnuts (And Peel Them)
A quick guide on how to roast hazelnuts with an easy trick to peel them.
Check out this recipe

How to Cook Chestnut Mushrooms with Butter, Garlic, Parsley and Lemon
These chestnut mushrooms are cooked in loads of foamy butter and finished with fresh garlic, lemon and parsley.
Check out this recipe

How to Season a Cast Iron Skillet Pan
A quick guide on how to properly season a brand new cast iron skillet pan with step by step instructions.
Previous Post: « Smoked and Grilled Corn on the Cob with Umami Butter
Next Post: Easy, Garlicky Padron Peppers with Ginger and Lime »