Unlike my cinnamon ghost meringues from last year, these mini marshmallow ghosts are A LOT easier to make.

Plus, who doesn’t LOVE the soft and chewy texture of a homemade marshmallow?!

Yep, these little guys are made using a simple recipe for piped marshmallows with only a few ingredients and they’re totally gluten-free.

How to Make Mini Marshmallow Ghosts

Here a the quick recipe summary for these Halloween treats:

The most difficult part about this recipe is finding the right gelatin. There are two types of gelatin: sheet gelatin and powdered gelatin.

To make things even more confusing, there are different strengths of gelatin called “bloom strength”.

I’m using Dr. Oetker Gelatin Sheets from the Netherlands and despite my best efforts, I can’t find the actual bloom strength. However, this handy guide from Chefsteps indicates that it’s most likely the higher 250 bloom.

Still, European gelatin strengths may be different compared to other parts of the world (even with the same brand).

Note: my gelatin sheets are 3 inches by 5 inches and not the larger ones that are commonly used in the restaurant industry.

If you can’t find gelatin sheets you can also substitute the sheets for 2+1/2 tsp gelatin powder.

Tips For Working with Gelatin

Electric Mixer: You’ll need a high-powered mixer with a whisk attachment as this recipe cannot be made by hand.

Kitchenaid stand mixtures are great but a cheaper hand mixer also works and takes up a lot less room in your kitchen.

I really love this one from Breville which is powerful but still quiet. Candy Thermometer: This is important because a regular kitchen thermometer will probably not be able to reach the high temperature needed for this recipe.

I’m still using this cheap ThermoPro thermometer which doubles down as a meat probe for roasts and BBQ. But you may want to invest in a candy thermometer that clips on the side of your pan like this.

No. Traditionally, marshmallows contain gelatin which is derived from pork or beef. There is, however, vegan gelatin, although I have not tested it with this recipe.

Can You Freeze Marshmallows?

Yes. Freezing marshmallows is a great idea because they’ll last longer and the texture of a frozen marshmallow is still a little bit soft.

To freeze these marshmallows, dust them first with a little icing sugar and carefully store them in a large Tupperware container for up to 4 months in the freezer.
To defrost, let them sit overnight in the fridge until softened.

Marshmallows were actually invented and enjoyed first by Ancient Egyptians as early as 2000 B.C! [1]

Marshmallow was first made from the mallow plant and mixed with honey and nuts. Much later, French candy makers discovered that gelatin worked much better. 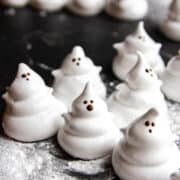 For Blooming the Gelatin

Once the marshmallow is in the piping bag it must be piped right away otherwise it will set in the bag.  The marshmallow ghosts will continue to set while in the fridge for up to 24 hours. After that, the gelatin will not set any further.
Liked this recipe?Follow @Bdeglazed!

Buttery, Flakey All-Purpose Pie Crust – Pate Brisee
Pate Brisee – Use this unsweetened, all-purpose pie crust for sweet and savoury pies or quiche. This can be made in one day but it's much better if made the day before.
Check out this recipe

Pistachio “Ferrero Rocher” – Vegan Chocolate Truffles
These vegan "ferrero rocher" chocolate truffles use pistachios instead of hazelnuts for an easy but delicious Valentine's day dessert.
Check out this recipe

How to Make Ghost Mini Meringue – Halloween Treats
A recipe for cinnamon ghost meringue that's easily the most hilarious Halloween dessert.
Check out this recipe