They pack an extra punch of flavour from the addition of dried guajillo, cascabel and chipotle peppers and can be made in under 2 hours with a pressure cooker.

Are you ready for life-changing tacos?

What are Birria Tacos?

Birria tacos are the holy grail of tacos. And for us at home, this means, slow-cooked beef tacos fried in some delicious chilli-flavoured beef fat and served with a beef “consommé” to dip the tacos in.

Traditionally from the state of Jalisco, Mexico, Birria tacos are made from goat or mutton and are marinated overnight in a flavourful adobo sauce. They’re slow cooked in a broth until fork tender and then stuffed inside corn tacos. After which they are then fried in the beef fat from the stew until golden brown.

These tacos are so good that there are even street vendors called birrierias that serve exclusively this style of taco.

Why are Birria Tacos Served with Consommé?

The consomé served alongside these tacos is not a traditional French consommé, but more of a spicy beef broth. French consommé is a meat or vegetable broth that goes through a clarification process to make it ultra-clear.

For the sake of this recipe, we’re not going to clarify the broth because it will not add any extra flavour and it takes up precious time that I’m sure you can find a better use for.

The consomme served alongside Birria tacos is not only extra delicious, but it’s also a smart way to use up the broth that the meat is cooked in.

The difference with this consomme is that it’s packed full of rich spicy flavour that adds a serious flavour punch when you dip your tacos in it.

Is this an Authentic Birria Tacos Recipe?

Because I didn’t grow up in Birria, this recipe is not authentic and is instead adapted for you to enjoy at home. With that being said, these tacos are still extremely delicious and probably the only way I’ll make tacos at home from now on.

The traditional method for Birria tacos varies but the most common method starts with huge pieces of beef shank with all of its fat left intact. This is then marinated overnight in an adobo sauce. The beef is cooked in a broth (sometimes even smoked first) with the adobo. The fat from the broth is saved and used to fry the tacos in.

I’ve tweaked this recipe a little to make it work in an Instant Pot, which saves a lot of time and makes an incredibly flavourful broth.

After testing, I’ve discovered that there are some steps you can skip and others that you just can’t. In the next headings, I’ll outline these and discuss ways to make this recipe faster without sacrificing flavour.

You don’t need to marinate the beef overnight in adobo sauce but that is traditional and it will increase the flavour of the stew.

A pressure cooker will yield a more flavourful broth than a traditional stew or dutch-oven preparation and you can likely skip the overnight marinade if you use this method.

If you’re short on time, you can skip the marinade and still get great results.

If you do have the time, marinate the beef overnight in the sauce but be sure to let the adobo sauce cool first before adding it to the raw meat. Marinated meats should always be kept completely cool otherwise you run the risk of leaving the meat in the danger zone and increasing the chance of unwanted bacteria growth.

You won’t want to skip the addition of guajillo, cascabel, or chipotle peppers in this recipe. This is crucial to the flavour of the dish and the beautiful orange colour of the tacos.

However, you can use just one type of these dried peppers such as the cascabels, or guajillo peppers and still get a delicious stew. But the chipotle peppers on their own will not be as good.

They are a little pricey and hard to come by but you can sometimes get a discount if you buy in bulk. To me, cascabel peppers are worth their weight in gold because their deep flavour is second to none.

If you have a Mexican or Latin grocery store near you then that’s the first place I would go to find these peppers. Look for chiles that are slightly shiny with a flexible texture and not too brittle. They should smell fragrant and a little bit like dried fruit.

If not then you can usually find decent peppers online. I always try to support the local businesses first but if you can’t find a store then you can always buy them online.

These dried peppers will also make a nice stew when mixed with chipotle peppers:

I recommend buying tacos mixed with corn and wheat for the best flavour and texture.

Pro-Tip – Microwave taco shells for 30 seconds before frying them to make them easier to fold.

The Perfect Beef for Birria Tacos

The perfect cut of beef for this recipe is beef shank or short rib but chuck also works really well. In this dish, we use the beef fat from the stew to fry the tacos so you’ll want a cut with good marbling.

If you can find a little beef tallow from the butcher then you can add a few pieces of this (maybe 5-10% of the weight of the meat) to the stew and you’ll end up with plenty of fat to fry the tacos in.

Stay away from lean cuts of meat like eye of round or that bag of “stewing beef” from your grocery store. That mysterious bag of meat will almost always yield dry over-cooked meat.

Cook the Tacos Low and Slow

When the tacos are dipped in the broth, they’ll brown much faster. Cook the tacos on low heat to get an even, golden brown crispy shell.

If you don’t have enough fat from the braise, you can add a little extra beef fat or vegetable oil which will make frying them much easier.

How Spicy are Birria Tacos?

Everyone has different opinions on how hot they like their food but I would say these tacos are mild-medium level spicy with most of the spice coming from the chipotle peppers.

If you can handle jalapenõ-level hot, then these tacos will be no problem for you.

Cascabel and guajillo peppers are not too spicy, ranging from 1000-5000 Scoville units but pack a ton of flavour.

You can increase the spicy flavour in this dish by leaving the seeds of the peppers in the sauce.

How to Make this Without an Instant Pot

If you don’t have an Instant Pot that’s no problem. This recipe will also work well in a slow-cooker or a Dutch oven.

Slow Cooker – Bring the marinaded meat to a boil, then add this to your slow cooker and cook on the low setting for 8 hours or until the meat pulls away with a fork.

Dutch Oven – Bring the marinaded meat to a boil in the Dutch oven and place in an oven at 325°F/ 165°C for two hours with the lid on.

Tips to Nail These Birria Tacos at Home

What to Serve with These Tacos

These tacos are traditionally served with fresh cilantro, lime and onions. If you don’t like cilantro like me, don’t worry because there are plenty of tasty alternatives:

How to Store & Reheat Birria Tacos

The next day the braised beef will be even better.

To reheat, simply bring the broth with the beef inside to a boil. Strain out the beef from the broth and add to the beef-fat dipped taco shells. Fry until golden brown on both sides and finish with your favourite taco accompaniments.

Store the cooked beef in the broth for up to 5 days in the fridge or freeze for up to 6 months in the freezer. 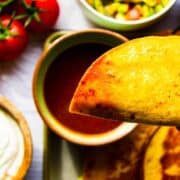 These Birria tacos are cooked in a mix of cascabel, guajillo and chipotle peppers for the ultimate rich and smokey fork-tender taco filling. They're fried in the beef fat until golden brown and served with extra broth on the side for dipping.
Prep Time 20 minutes
Cook Time 1 hour
Pressure release 10 minutes
Total Time 1 hour 30 minutes
Servings 4 people
Calories 600kcal
Cost $25/20€

For the Pepper Salsa (Optional)

This recipe is inspired by Birria Landia food truck in NYC and chef Francisco Ruano of Restaurante Alcalde in Jalisco, Mexico.

How to Make Ancho Chili Powder

How to Make Ancho Chili Powder
Grinding your own ancho chili powder is easy and the best way to preserve the flavour from these tasty dried peppers.
Check out this recipe

My Best Chili, Ever.

Short Rib Chili – The Ultimate Pressure Cooked Super Bowl Chili
This recipe uses a delicious pressure cooked short rib stock and a secret weapon umami butter to make one hell of a super bowl chili. Plan it out, grab a beer and let's get cooking.
Check out this recipe