One thing’s for sure, these smoked baked potatoes will be made many many more times.

The real magic here is the combination of smokey, crispy, potato-y exteriors stuffed with a rich, twice-baked potato filling.

The flesh is scooped out and mixed it with the usual suspects – butter, cheddar cheese, fresh chives and a little salt and pepper.

The result is one heavenly potato.

And if you’ve already got a big piece of meat on the pit (or these smoked chicken thighs) then not making these would only be a missed opportunity.

You can thank me later for this one. Get those spuds on the smoker now!

Basically, anything I put on my Traeger becomes extra magical and these smoked baked potatoes are no exception.

Now you could easily just smoke these potatoes, add a little butter, salt,and pepper and call it day.

Nothing wrong with that.

But if you’re willing to go the extra mile for something wildly better, then a twice-baked potato is your calling.

They’re even better than you imagined.

What You’ll Need for these Epic Smoked Baked Potatoes

Let’s talk ingredients before we set on our smoking adventure:

Potatoes: First off, you’re going to want to choose a floury potato instead of a waxy potato. Waxy potatoes don’t make very good baked potatoes because the texture is too firm [1]. Ideal potatoes would be Russets, Maris Pipers, King Edwards, Yukon golds or Jersey Royals.

Vegetable Oil: The oil has two purposes here. To help crisp up the skins and to help the salt stick. You don’t need a lot, just a little oil will go a long way.

Creme fraiche: This is optional, but a little added right before serving is like the icing on the cake. You can also use sour cream too.

Chives: A classic topping for baked potatoes that adds a soft onion flavour.

Cheddar Cheese: Sharp cheddar, white cheddar or old cheddar are all fine by me! You could use just about any cheese here too. Gouda, Emmenthal, gruyere and even this smoked gouda are all good choices.

These ingredients didn’t make it into my potatoes this time around but are still respectable toppings.

How to Bake a Potato in a Smoker

Smoking potatoes is easy and you don’t even need aluminum foil!

Here’s a quick summary on how to make these smoked baked potatoes:

The cooking time of these smoked potatoes will vary greatly.

To play it save, plan for 3 hours of smoking at 225°F/107°C but check after 2 hours as smaller potatoes may be finished already.

You can also do these potatoes at a higher temp of 300°F/148°C. Aim for 2 hours of smoking but check them after 1+1/2 hours in case they’re ready sooner . They’re quite flexible on the cooking temperature and I would adjust the temperature based on whatever meat you’re also smoking.

For example, if you’re also smoking chicken thighs at 300°F/148°C, then smoke the potatoes at the same temperature. No need to lower it.

After all, it’s not rocket science it’s potato science. When the potatoes are soft, they’re done and you can play with the temperature to match your other BBQ food.

Did you know you can also save the potato skins for a later? Late night snack anyone?

As long as they’re still somewhat together, the skins can be roasted again in the oven until crispy and topped with your favourite toppings.

You can also deep-fry them until they’re crispy all over.

Try It With These Other Smoker Recipes

These potatoes are even better with these other smoker recipes.

Here are some more smoker ideas:

Can you eat the potato skins?

Yes. Cooked potato skins are delicious as long as they’re cleaned and cooked. Raw potato skins cannot be eaten as they’re slightly poisonous. If you plan to eat the skins, brushing the exterior of excess dirt before cooking is a good idea for obvious reasons!

Why use oil on baked potatoes?

A little neutral oil helps to crispen up the skins of the potatoes. It also helps the salt to stick to the skins.

How long do you smoke potatoes at 225°F?

This will really depend on the size of your potatoes, but I’d plan for about 3 hours of smoking time. Check after 2 hours, as some smaller potatoes may be done sooner.

How long do you smoke potatoes at 300°F

2 hours is perfect for small-medium sized potatoes. Larger ones may take even longer. 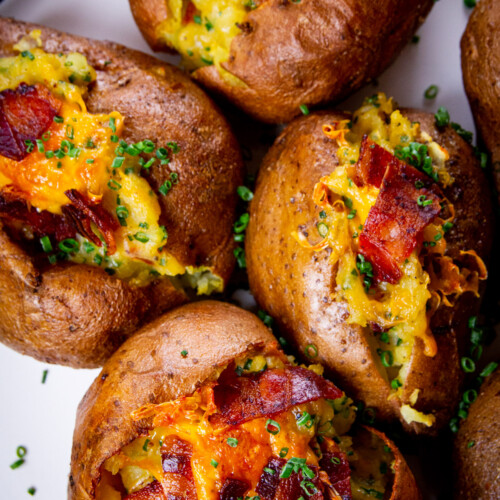 For the Toppings (All Optional)

Poking holes in the potatoes before smoking prevents them from exploding and making a mess of your smoker.
Liked this recipe?Follow @Bdeglazed!
Crispy Traeger Wings – The BEST Smoked Chicken Wings
You've got everything in these Traeger wings. Smokey, juicy, flavourful smoked wings with a gorgeous crispy exterior. What else do you want?!
Check out this recipe

Epic Traeger Smoked Burgers
These Traeger smoked burgers are EPIC. With extra juicy interiors and a bold smokey flavour, you will make some new friends with this one.
Check out this recipe

Maple Glazed and Hot Smoked Traeger Salmon
This maple glazed Traeger salmon is one of the finest recipes you can make with your smoker. It won't take too long to make and the flavour of the sweet, smokey salmon is incredible.
Check out this recipe