I still cannot believe how good these smoked and roasted leeks turned out.

You’ve got everything you’d want in a vegan BBQ – Sweet, deliciously rich and warm flavours from the Raz el Hanout spice mix and an awesome smokey flavour from cooking them over charcoal.

Just like how caramelized onions pick up a natural sweetness from cooking them slowly, these leeks are also naturally sweet.

These leeks are gluten-free, dairy-free, and vegan and make an awesome side dish to other grilled meats, fish or seafood dishes.

What is Raz El Hanout?

Raz el Hanout roughly translates to “head of the shop” in Arabic and is commonly used in Middle-Eastern cuisine.

There isn’t an exact recipe for Raz el Hanout as each spice blend varies from household to household. Just like how a Texas BBQ rub is completely different from a Memphis BBQ rub.

Some blends may be a little hotter than others but generally, they’re on the sweeter side and very aromatic.

The spice gets a distinctly sweet flavour from the use of warmer spices such as nutmeg, allspice, cardamom and cinnamon even though there’s no sugar added.

I absolutely love this spice blend mixed with grilled foods, especially these roasted leeks, as they take on a gorgeous sweet and smokey flavour.

Although I think my recipe is delicious, it’s by no means authentic. If you’re looking for an authentic recipe from an actual expert, try this book: Mourad: New Moroccan

How to Make Your Own Raz El Hanout

As every Raz el Hanout blend is a little different, feel free to work with what you already have in your spice cabinet. For me, this is a great way to use up the almost forgotten ground ginger in my spice cabinet.

Also, if making your own spice mix isn’t really your jam, you can definitely pick up a pre-made mix. It won’t taste as good as my spice mix (wink;)) but at least you won’t have to pull out the measuring spoons…

Don’t worry if you can’t find all the spices in the recipe as you can swap them out to make it your own. Although you’ll probably want to at least have some turmeric, nutmeg, paprika, cayenne and cinnamon at the very least.

If you’re really feeling fancy, then roasting whole spices first before grinding them fresh will always be better than buying pre-ground spices.

Still, when I’m cooking at home and I’m in a rush, I’m not always in the mood to pull out my blender for just a few spices.

The following common spices are all good choices to include in your Raz el Hanout:

And some more rare ingredients that may be added to the mix:

Make Sure You Wash Your Leeks Well

This is one step you won’t want to skip because leeks are always very dirty. There’s nothing worse than biting into a leek full of muddy sand. Ughh…

I find the best way to clean them is to split them in half and briefly check each layer for any hidden dirt.

Run them under cold water with the root end high to allow the dirt to flow out the top.

How to Make these Smoked and Roasted Leeks

The steps are quite simple and outlined below:

Can I Make Roasted Leeks Without a Smoker or Grill?

You could definitely make these by only roasting them and they’d still be delicious.

To roast the leeks:

Wait? I Thought You Couldn’t Use the Green Tops?

Most people throw away the green tops but it’s a shame because they can also be delicious when cooked.

The tops are usually quite tough, especially if the leeks are larger and older. I always remove the full outside layer of the leeks and discard this as it’s just too difficult to cut.

Then, I grill these over charcoal with a wood chunk or two to add some nice smokey flavour. Once they’re softened and broken down, they’ll be much easier to chop or pulse in a food processor.

They’ll absorb a lot of smokey, charry, grilled flavour and you can save them in your fridge for days.

Here are some ideas for how to use the chopped, smoked and charred green tops:

How to Store these Leeks

These leeks can be stored in Tupperware containers in the fridge for up to a week. Avoid freezing them, as they’ll lose their nice texture.

Alternatively, you can also cover these in olive oil and serve them cold as a delicious accompaniment to antipasti.

They’re similar to onions, but with a milder, slightly sweeter taste. The green parts are quite tough, while the whites are soft.

Can you eat raw leeks?

There isn’t really harm in eating raw leeks, other than the fact that you’ll get onion-breathe! Even though they’re milder than raw onions, they’re still quite strong so I always cook my leeks.

Are all parts of the leek edible?

Most people throw away the green tops as they’re quite tough but as mentioned above, there are plenty of ways to utilize them. Just make sure you remove the outside layer of the leeks and discard this as it’s too chewy.

How do you prepare leeks for cooking?

Wash them thoroughly! I give them a quick rinse before bringing them to my cutting board. Slice off the root end and then separate the green from the tops. Slice the leeks in half lengthwise and run each layer under cold water to remove all of the dirt inside.

How long should leeks be cooked?

It’s always better to overcook leeks rather than undercook them. Roasting them in half in the oven can take anywhere from 10-15 minutes whereas slowly cooking them in butter and stock could take up to 40 minutes.
Properly cooked leeks should be soft without any crunch. 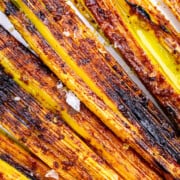 Don’t forget to wash your leeks well, as they’re almost always super dirty inside. You don’t have to grill the leek tops if you don’t want to (most people throw them away), but I always try to minimize waste in the kitchen as much as possible. You can also add the raw leek tops to broths and soups, as long as you discard them after cooking.

Smoked and Grilled Corn on the Cob with Umami Butter
The absolute best way to enjoy corn. Hot smoked corn on the cob, charred over the coals and slathered in delicious umami butter. There's no better way!
Check out this recipe

Reverse Sear Smoked Ribeye With Umami Butter
A step-by-step guide on how to make a reverse seared, smoked ribeye with a weber kettle grill. Slathered in umami butter for maximum flavour.
Check out this recipe

An Ultra Smooth Roasted White Peach Puree
Use this super smooth white peach puree in yogurt, with cakes, alongside grilled pork or mixed into a bellini. Gluten-free and vegan (if the butter is left out).
Check out this recipe